From prehistory on Landek, part 2.

1st stop: Komenského sady (Comenius Orchards) in front of the Muglinovský bridge
2nd stop: Přívozská heap, mine and coke plant František, Hubert Mine in Hrušov and its heap
3rd stop: Confluence of Ostravice and Odra

Komenského sady are one of the oldest parks in Moravian Ostrava. They were founded at the New Shooting Range in 1892 at a place called Cingl, where there used to be a scum. The New Shooting Range was demolished in 1926 to make way for the New City Hall. Originally, the parks were called Střelniční Park, since 1898 New City Park and since 1906 Park of Emperor František Josef. In 1919 they were renamed Komenského sady. In the years 1942–1945 they were called Reinhard Heydrich Park. In the years 1928–1933, Komenského sady were significantly expanded according to the project of prof. ing. arch. Jaromír Moučka (1897–1961) and took up almost today’s space. In 1992, Ing. Lubomír Rychtár prepared a study of orchards and embankments, which was partially implemented, e.g. terrain waves in the northern part of the park. In 2011, a project was carried out to restore Komenského sady by architect Radim Václavík and sculptor Kurt Gebauer.

Komenského sady were registered as a significant landscape element in 1994. The area of the park is around 30 ha. There is a memorable summer oak tree (Quercus robur), whose trunk has a circumference of over 431 cm. Typical for the park are linden alleys and spacious lawns, sometimes profiled into mild terrain waves.

The Ostravice river below the park brings gravel material and creates elongated islands. The last dry years have caused low flows in the river and the originally flooded gravel alluviums have overgrown with vegetation. Ostravice used to be very polluted, for example with coal sludge and wastewater from the Paskov pulp mill. Since 2007, the process of humanization of Ostravice has been under way in the city, which has significantly solved the quality of water in the river, the use of the banks and part of the riverbed, i.e. the berms, for urban recreation.

2nd stop: Přívozská heap, mine and coke plant František, Hubert Mine in Hrušov and its heap

Beyond the Ostravice river we can see a hill in the shape of a truncated cone on an area of 15.75 ha, the so-called Přívozská heap. It reaches a height of almost 100 meters. It was piled up with waste rock from the nearby František Mine, which was located behind the railway, at today’s Koksární Street, and the coke plant. It is the third largest heap in Ostrava, after the Ema heap and the Heřmanice Mine heap.

The material was piled up on the heap between 1926 and 1988. In the burning places and steam exhausts, bryophytes were common, such as the purple forkmoss (Ceratodon purpureus). The northeast side of the heap was forested. Birch, poplar, goat willow and black elm grew here in profusion. At present, the cooling places are covered by stands of bushgrass (Calamagrostis epigejos). The overgrown dump is a natural space in the urban wilderness.

The František Mine was founded in 1852 by the Klein brothers and named after one of them – František. In 1855, the mine was bought by the company Severní dráha Ferdinandova (Emperor Ferdinand Northern Railway), which, in addition to the railway from Vienna to Bochnia near Cracow, also owned several coal mines in the Ostrava-Karviná district. 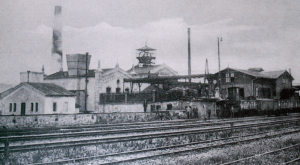 In the years 1912–1917, the František Mine was modernized and electrified. The mining pit was already 530 m deep at that time. In 1927, the Jiří Mine and in 1933 the Jindřich Mine were connected to the František Mine.

The Odra Mine (formerly the František Mine) became famous, among other things, for the fact that the last wagon with mined coal was symbolically taken out here on 30 June 1994, thus ending the mining of hard coal in the city of Ostrava. The headframe was blown up in 1998.

The František Coke Plant was founded in 1908. Like the František Mine, it was renamed several times. In 1952, it became part of the Ostrava-Karviná coking plants. Today, its name is Koksovna Svoboda, it is the only one active in the city of Ostrava and is part of the joint-stock company OKK Koksovny. It has four coke oven batteries with 210 chambers. It focuses mainly on the production of foundry coke. The year-round production of the Svoboda Coke Plant is approximately 800,000 tons of coke. 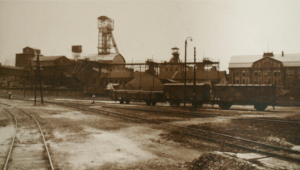 The mined coal was transported to the František Coke Plant by suspended cable car trolleys. In the years 1924–1928, the Hubert Mine was electrified. In 1945, the mines of the Emperor Ferdinand Northern Railway were nationalized and from 1 January 1946, they were incorporated into the newly established company Ostravsko-karvinské doly in Ostrava. In December 1946, the Hubert Mine was renamed the Stachanov Mine after the Soviet miner and strike worker Alexei Grigorjevič Stachanov (1906–1977). In 1964, the Victory February, Eduard Urx and Stachanov mines were merged. Stachanov became an auxiliary plant and independent mining was terminated in the mine on 1 July 1966. The Stachanov mine was organizationally abolished on 1 January 1974 and backfilled in 1992.

The heap in Hrušov was founded in 1933, when tailings from the openings of the Hubert Mine were piled up here. After 1960 until 1980, an area was set aside in the northern part for the Land Reclamation Research Institute, which tested the size of the overlap of clay layers during the agricultural reclamation of tailings embankments.

In 1987, a fire broke out in the heap as children burned here their books and exercise books. The fire lasted until 1988. The heap was covered with clay and the slope was flattened. The heap in the partially depopulated locality of Hrušov provides peace, shelter and plenty of food for wildlife in the urban environment. 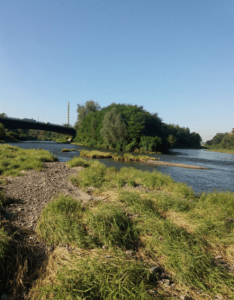 m their overflow by flood defenses and landscaping around the motorway bridge (continuation of the D1 motorway put into operation in 2007) and the industrial buildings of the Přívoz Heating Plant. Under the dam there is a scattered greenery of individual trees, such as poplars and willows. The banks of Ostravice and Odra are reinforced with stone. Ostravice at the confluence brings a larger amount of gravel material, which is deposited on the right bank of the Odra. The vegetation of the flooded island consists of the dominant reed canary grass (Phlalaris arundinacea). The fluctuating nature of the Ostravice river does not always allow navigability for recreational vessels departing from the shipyard below the Silesian-Ostrava Castle through the confluence to Bohumín.