From prehistory on Landek, part 1.

Start: Masaryk Square in front of the Ostrava Museum

You may know that Spolek Elegant in cooperation with Ostrava Expat Centre brings us project To the Saddles – guided rides through the history, culture and nature of Ostrava. The first ride should have been in July but it was cancelled due to rainy weather. Stay tuned for a new date. In meanwhile, let´s learn something about its stops and Ostrava’s history.

Masaryk Square in Ostrava was until 1930, before the New City Hall was built and Prokeš Square was created, the main square of the city of Moravian Ostrava. Masaryk Square was originally rectangular, in 1968 the group of houses was demolished and today’s non-traditional “L” shape of the square was created. From the Middle Ages until the 19th century, there were 42 burgher houses on the square with the Propination (tapping beer) Privilege and a town hall. In 1842, today’s 28. října Street was connected. Markets were held in the square. In the Archives of the City of Ostrava a document is kept from 1362, by which Charles IV allows Moravian Ostrava to hold annual markets. In 1795, Emperor Francis II ordered cattle markets to be held in Moravská Ostrava on the square. But as early as 1808, cattle markets were relocated to the area of today’s Smetana Square due to hygienic unbearableness. 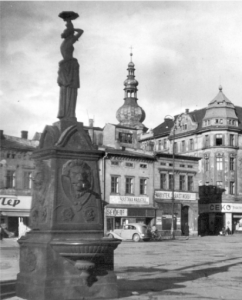 A plague column with a statue of the Virgin Mary stood on the square since 1702 as a reminder of the plague in the city. In 1960, during the reconstruction of the square, the column was removed. In 1992, after the restoration and completion of the missing parts, it was re-installed on the square.

In 1763, a great fire engulfed Moravian Ostrava. A third of the city burned down, and with it 22 burgher houses (17 of them in the square). The city council was grateful that the whole city did not burn down and erected on the square a statue of St. Florian – patron saint of firefighters. The statue was removed in 1960 during the reconstruction of the square. For some time it was stored in the castle park in Kravaře, then it stood in front of the church of the Virgin Mary, queen of the sacred rosary in Hrabůvka. In May 2008, it was ceremoniously placed back on the square. It has been a cultural monument since 1990.

There was also a stone fountain in the square, to which drinking water was supplied through a wooden pipe from a nearby well. The stone fountain was replaced in the second half of the 19th century by a cast-iron one with a statue of Hygeia (daughter of the Greek god of medicine Asklepios was the goddess of health, purity and the moon). The fountain was also removed from the square in the 1960s. The statue of Hygeia was found cut in 2 in the 1980s in the garden of a villa in Frýdek-Místek. It was handed over to the Ostrava Museum. The staff of the Department of Foundry of the Technical Univerzity of Ostrava connected it and today you can see this statue on the 1st floor of the Ostrava Museum.

The Old Town Hall is the oldest preserved secular building in Moravian Ostrava. We don’t know when it was built. The oldest mention of the town hall is in a document dated 24 February 1539. On 31 July 1829, at 8.45 am, lightning struck the town hall tower and damaged it. It was even supposed to be torn down, but the inhabitants of Moravian Ostrava stood by the tower and saved it. In 1930, the municipality moved to the New City Hall and the Old Town Hall became the seat of the museum. The ceremonial opening of the expositions of the town museum took place on 4 October 1931. Since 1963, the building has been a cultural monument. The general reconstruction of the Old Town Hall building took place in the years 2002–2005. The current expositions have been open to the public in the museum since 2009. You can see here, for example, a unique room astronomical clock made by Jan Mašek in 1924–1935 and donated in 1967 to the city of Ostrava for its 700th anniversary of the oldest written mention of Moravian Ostrava. The astronomical clock is 225 cm high and 93 cm wide. It contains 2500 components, is powered by 8 kg weight and is pulled by an electric machine. It has over 50 different functions (time, calendar, astronomical and planetary ones).

On the building of the Old Town Hall you can see the colourful emblem of Moravian Ostrava: in a blue shield on a green lawn a silver horse in a hop with a golden saddle and a red cover accompanied by a golden rose with green petals and a red ovary at the top left.

The silver horse apparently got into the emblem of the city from the coat of arms of the first Ostrava bailiff. The Golden Rose comes from the family coat of arms of the Bishop of Olomouc, Stanislav I Thurza of Bethlenfalva (1497–1540), who showed great interest in the prosperity of Moravian Ostrava and managed to pay it off.

Since 2009, the statutory city of Ostrava and its organizations have been using the logo instead of the city emblem. The city emblem is used only exceptionally on official occasions. The logo was created by Studio Najbrt. It consists of a light blue inscription OSTRAVA and three dark blue exclamation marks. They express the humour, energy and self-confidence of Ostrava and its inhabitants.

There are several legends associated with the creation of the city emblem of Moravian Ostrava. According to one of them, “A stubborn enemy once came to the region and besieged a well-fortified city. He tried his best to break through the walls, but the townspeople bravely defended their home. The enemy did not retreat, and food was diminishing in the besieged city, so hopes for deliverance were rapidly decreasing. When the townspeople were close to despair, one with a happy idea was found among them, to frighten by screaming the saddled but unbridled horse and send him out at night through one gate to the enemy. The trick was that the enemy would gather at this gate and would also expect the townspeople here, while they set out from completely different side. The proposal was generally accepted and implemented that night. The frightened horse caused a terrible confusion among the enemies, which was quickly used by the townspeople, who rushed out of the side gate and easily drove away the enemy. The city was saved, and there was great joy in the city. In memory of the happy idea, the townspeople put a frightened horse in the emblem.” (Taken from TENGLER, Erwin. Ostravsko w historii a powěstech. Vlastivědný sborník, Year 1, No. 3, Slezská Ostrava 1931, p. 18, 20.).