The first time I saw a pomlazka, was on a hike with my wife and her friend. The friend stopped the hike because she found just the right tree. She started breaking off branches and weaving them into a stick. My wife translated that she said, “If I don’t do this, nobody else will.” I was told she is making a stick for Easter. The next time I saw them was when my mother-in-law bought one and sent it to me, because she was afraid I might not have one. (She was right). So my first two encounters with the tradition were women trying to keep it alive. These women were both residing in Ostrava but each had grown up in rural areas.

When I talked to women from Ostrava, I found out that within the city, many women hate the tradition. They all described being chased by brutal boys. Many had stories about an uncle that seemed to enjoy it a little too much. 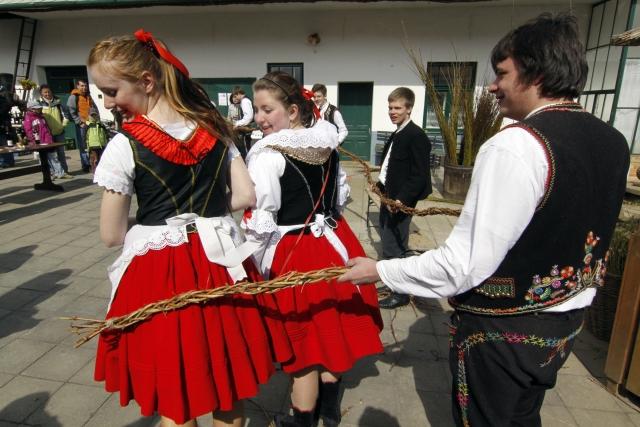 I didn’t truly understand until much later when I had kids of my own (boys) and got to spend Easter in a small village. It’s a village with about 150 people where everybody knows each other. My father-in-law instructed the boys and showed them how to lightly tap girls’ legs with their sticks, keeping in rhythm and reciting the poem “Hody hody doprovody.” At the end, the girls would tie another ribbon onto the end of each boys stick. Not understanding the language and only observing body language, it made me think of girls in medieval joust tournaments tying a ribbon on the knight’s joust if they favored him to win. In the small village, they wore expressions of love and admiration as my toddler sons learned old tradition. We would stay and chat with each neighbor. The men all had a shot of slivovice. I saw other neighborhood boys come and repeat the ritual. All lightly tapping, and all saying the same poem. The older they were, the more verses they knew. It was much more pleasant than anything I had heard described by friends who grew up in the city.

I was thinking that perhaps the difference was the small community. If any boy took the opportunity to thrash the girls, that reputation would probably follow him for life, and maybe even make it harder to find a romantic partner. Maybe the whole thing evolved as a sort of test to spot psychopaths and narcissists. A small village tends to keep stuff like that in check. In a city, there is less memory and retribution. Charismatic psychopaths and narcissists tend to be trend setters instead of outcasts.

If the origin of the tradition was a as a test and a teaching opportunity, I would certainly hope that the tradition lives on and returns to its roots. The idealized Czech pomlazka tradition is something I thouroughly enjoyed participating in and hope to see preserved.